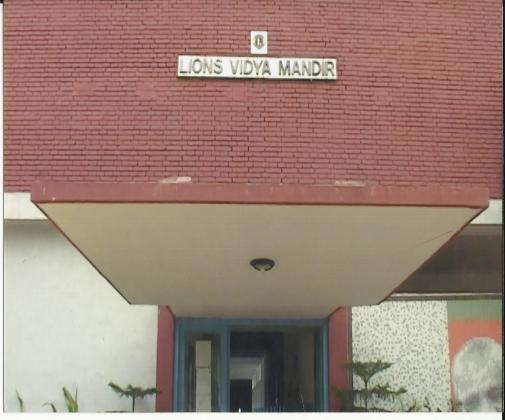 (A view of the Building of the Lions Vidya Mandir)

The lack of facilities for the children to get education closer to their place of residence prompted the members of the club to set up a school closer to their places of residences. A plot of land where some barracks stood in a dilapidated condition was chosen to set up a school. The members of the club approached the Govt. of India for allotment of a land behind the bungalows of Ministers of the Govt. of India in Kushak Lane (near Teen Murti) New Delhi and the Govt. agreed to allot the land for setting up a school. The Lions Club of Delhi was asked to deposit a certain amount to pull down the dilapidated quarters and finally possession of the land was given to the Lions Club of Delhi.

With the support of like minded friends, business associates, and by pooling their own resources the Lions Club of Delhi built a two storeyed building on the land to set up a school. The building plans were conceptualized by a young upcoming dynamic Lion Daksha Bhardwaj who had meanwhile joined the premier club. The building is based on famous dictum that winds of energy should flow from all directions. The portals of the new building were thrown open by the first Prime Minister of Independent India Pt. Jawahar Lal Nehru on 23rd Nov., 1963.